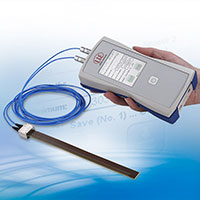 The capaNCDT MD6-22 is a capacitive handheld gauge for precision gap measurements, enabling highly accurate gap and distance measurements in industrial environments. Various features such as automatic gap detection are preset to simplify parallel alignment of the flat sensors for double-sided measurements.

The measuring system consists of a dual-channel handheld gauge and up to two capacitive sensors from the Micro-Epsilon product range. Here, the capaNCDT MD6-22 is impressive with its high flexibility as it is compatible with all capacitive sensors from Micro-Epsilon covering a wide range of applications. Operation is carried out easily via touchscreen.

You want to record the measured values to evaluate these later? Simply store them on the micro SD card. Other entries such as the measuring location are also possible.